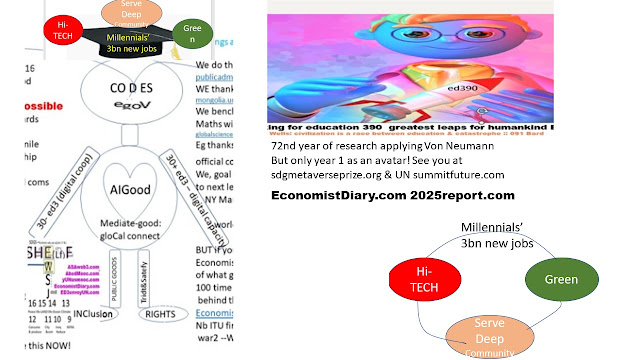 what we design in the 2020s will likely be last chance of the younger half of the world to be first sustainability generation - this applies to whatever is making a community you live in unhappy, afraid hurt

look at every Un video onAIi on sdgmetaverseprize.org - work out which ones societies you care about need- remember everywhere is likely producing relevant data but is yours being mapped- are teachers involved in designing back the 3 billion new jobs shown- where they are teens soennd most afternnots apprenticing in communities not being examined on theory- some schooling systems has taken at least one service in community project back as early as 7 year olds - why not find out what eg 7 year olds do as projects in amercan international school in barcelona and see whether your community offers parallel expereinces

look at how singapire's www.worldtoilet.org creates viral stories (free new for good) so that sanitation becomes a worldwide movement supported everywhere and increasingly integrated into schools curriculum -what kids know about health needs to be as imporatnt as any other curriculum in 21st C

solar energy inventioms have been available since 1880; when they first really mattered is partly a populatiion thing - in 2020s we may go over 8 billion beings compared with the 2 billion trapped in world war 2; as it happens my granaprents home in isle of aran had an early waring - when I was 4 neigbours would take turns to row not more than 50 feet into the bay and fill boat with mackerel then shared across the town; by age 9 the clyde was poluted mackerel were never seen agian- charging companies zero for poluting waters was certainly a local mistake though I can understand peoples need to balance human versus machine energy needs; what did not need to haoen was the worlds largest energy comapnies hiding data on global warming that they have done since the 1970s; sadly televiison pr has increasingly been used the wrong way in the west ; some comanies spend billions of dollars (if custmes money) to misinform

Posted by chris macrae at 1:00 PM No comments:

Title: Can AI help bridge the gap between quality deliberation and mass participation?

hello Ms Z - i know several fashion conscious chinese/asian americans in new york- do you have a link to your business or your goals - happy to try and scale collaboration - at the UN Guterres promised a big future summit in 2023; I am hoping to find many people who help action that either directly or by hosting a fringe festival  - i need to do a lot of editing at www.unwomens.com - do you use lunchclub? - meeting quite a lot of helpful people  chris macrae +1 240 316 8157 also i believe that www.musicforsdgs.com  (led out of wall street by a Japanese friend) and other conscious arts movements can make communities better- back in 1991 i was asked how to help brand then superstar ayrton senna - connection who youth celebrates why is a huge opportunity if we can all earn trust - women much more capable than men in most of my experience! wash dc +1 240 316 8157 I much prefer working on brand leaders or teachers with almost no money budget but huge amount of good to multiply - I have been writing books on that for 30 years but my time at world's biggest ad agency did energise me!... so much to learn... do you have a fav rhyme that turns out to be worth recalling?

Posted by chris macrae at 7:16 AM No comments:

Posted by chris macrae at 4:12 PM No comments:

Dear Michael
Stunning soros speech today on brexit- thanks  for circulating
2016 is 40th year since my father Norman Macrae published Entrepreneurial Revolution in The Economist 25 December 1976 - the first 40 year future history of what it would take to sustain net generation. I believe he then informally shared a lot of ideas with George Soros in his London home  including my fathers 1984 prediction of when the Berlin Wall would fall and how to handle emergent new leadership
A small board of global youth led by chinese women and a team in Bangladesh and I are writing world record book of job creators with a top 10 that includes George Soros...  Is there someone i can send my soros chapter to who can check for any inaccuracies or subtleties that may not be culturally the most valuable  for under 30s  to prioritise action around Soros hope for the future?
sincerely
chris macrae
washington dc
Posted by chris macrae at 8:26 AM 1 comment:

Congratulations to Sir Fazle Abed of BRAC on Opening of Bangladesh Studies at University of Berkeley 30 March
http://events.berkeley.edu/index.php/calendar/sn/bfi.html?event_ID=85520&date=2015-03-30

A Quiet Revolution in Bangladesh: Lecture by Sir Fazle Hasan Abed to inaugurate the Subir and Malini Chowdhury Center for Bangladesh Studies

What made pre-digital grassroot Microcredit brilliant has seen the baton passed on to mobile women4epowerment as the greatest economic movement our human race has ever celebrated. Operationally microcredit 1.0 has failed to survive the digital revolution sustainably (except when tied to pockets of Yunus fame, or sustained one community at a time unlike the sacling Clinton decsribes in this video). Moreover its smart side was inconveniently misunderstood wherever big  banking experts , students' professors or summit hosts didnt understand that womens community trust through health networking was integral precursor to exponential rising practices of microcredit village networking; meanwhile the empowerment of mobile 2.1 depends on newly interfacing operations that are virtual apart from the last mile

The good news is that the total bottom up banking systems of Bangladesh have been relentlessly integrated by brac from microcredit plus to brac bank to cashless banking bkash; that youth have been inspired to digitalise community banking circle apps (eg www.puddle.com ) and p2p networking; that yunus has demonstrated how the first gamechanging infrastructure of the mobile age is green energy for a billion off grid peoples; that worldwide soros, women4empowerent and MIT networks have mobilised what eg yunus isolated in Bangladesh could not sustain when opposed b all of Bangladesh's top-down government. However Yunus (see YunusOlympics and NobelAtlanta )  remains youth world fairs greatest attraction - the antidote to corporates whose ad agency's greenwashing audits communications as all about image and addiction, nothing to do with sustaining future generations and celebrating livelihoods

Posted by chris macrae at 12:38 PM No comments: